Originally written by and published on Digi.no.

Regulating the sound level of background music is associated with work and stress. Now electronics and algorithms can take over.

Everyone has experienced sitting in a nightclub and getting annoyed by the sound level of the sound being played. Either it is too high or too low. Just the right fit is one of the rarities. Those behind the counter, who like to have control of the volume button, have other things to do than walk around asking the guest if the level is appropriate and regulate according to the answers. They will always have difficulty guessing the right volume.

The same problem applies to retailers and other places where they play background music to provide a great customer experience.

The Norwegian start-up company with the descriptive name Waved has devised and constructed a solution to the problem. Through a combination of hardware, software and algorithms, the sound level is controlled automatically.

- We use the sound in the room, both from people and other sources, to calculate the optimal volume of the music. It should not be too high or low, but create a good atmosphere for the guests. Many people come to talk together, not to shout together, says the manager of the company, reed. ing. Daniel Harper. He and three other entrepreneurs have been developing the technology and the company since 2018. Now they are ready for the market.

The sensors are microphones connected to a Raspberry pi that picks up and processes the sound in the room and sends the information onto the hub. There are several of these in a room. Photo: Waved Foto: Waved

Even the best solution in the world will never hit one hundred percent for all guests, but Harper believes they will always do a better job than those behind the counter. They do not have time to follow the sound in the room and adjust the volume accordingly.

To pick up the sound level in the room, Waved uses from two to many sensors consisting of microphones and processor cards based on the Raspberry Pi. The sensors calculate the dB level from the room which varies with the number of people and how loud they are. The data is sent over WiFi to a hub. It also has a Raspberry Pi card that pulls together all the audio data and calculates the correct volume. The hub can be controlled using a web interface, or a web app, which can be run on all kinds of devices, and this is where the output level of the sound is set.

Control panel: The Waved hub keeps in touch with the sensors and regulates the sound level of the amplifier system. Photo: Waved Foto: Waved

When all settings in the web interface, e.g. on a phone that talks to the hub, is done, then the system takes over the volume control by controlling the inputs to the amplifier.

The basic settings, which form the basis of the algorithms, have been developed after a series of interviews with bartenders and customers.

- The sound we pick up and process has very rough sampling, so we can not record voices. But the sound can also say something about how people are distributed in the room and estimate how many there are. It is possible to use two sensors in small rooms, but there is no upper limit for how many are connected. The more sensors, the more fine-meshed the sound can be regulated, says Harper.

It is not the case that if a table is very loud then it is enough for the algorithms to drive up the volume. It is the average in the room that is the starting point for the sound level.

Currently, the sound is regulated globally in the room on the basis of the information from the sensors and algorithms, but the company works with sound that can be volume regulated differently in different zones in the room.

- This requires a little more of the amplifier system, but at the same time many nightclubs want to have different zones in the room with different sound levels, he says.

The corona pandemic could not have come at a worse time for Waved. The product was ready for sale and now they were going out to sell. Then the potential customers were shut down. Now they want to scale up sales as soon as possible. The feedback from a test customer is described as convincing.

The pandemic also promoted the idea of ​​using the opportunity to analyze the number and distribution of people in the room to inform about the security situation. Since everything was developed to be able to do such analyzes, it was an easy task to add such corona safety.

- The idea of ​​using the information from the sensors was something we came up with during the pandemic. When the nightclubs now open, it will be important to know how the guests are located in the premises, and whether too many are sitting too close together. The software can tell the staff at no extra cost, says Harper.

Former bar manager at The Pub at Majorstua in Oslo has tested the system from an early stage.

- As they developed the system and the algorithms, this worked very well. Our room was small with low ceilings and then we often had to regulate the sound according to the number of guests. It is not necessarily so much work as long as the sound system is in the bar, but there is a lot of stress when it is busy. Therefore, it was nice to not have to think about regulating the music that we must have in this industry. Where the music system is not as accessible as we had it, it is of course much more work to handle the regulation, he says. 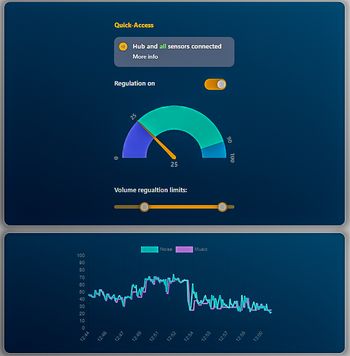 Web interface: Everything is controlled from a web interface, whether it is on PC or mobile. Photo: Waved Foto: Waved

A restaurant can not leave to Spotify or Tidal and stand for the music. It is not allowed due to rights. One of the major players is Musicbox. They provide streaming music with all the rights needed for nightclubs, shops, and others who want background music.

- We believe that our product has an international market, but we start in Norway. Therefore, it is to integrate the solution with Musicbox and other important players. A bartender should make customers happy and does not have time to be a DJ, says Harper.

The business model Waved will use is a subscription. The hardware itself can be rented or purchased. The company has received support from Innovation Norway for the development.